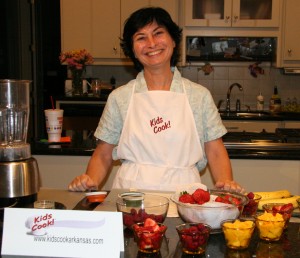 Faith Anaya is passionate about food and kids.  She lived in San Francisco for 14 years before moving to Little Rock in 1999.  Working in a number of gourmet food businesses in California gave her an appreciation for fresh ingredients, local sources and healthy eating.  She has traveled extensively, lived in Europe and gathered recipes from around the globe.   In the fall of 2003, Faith began working with kindergarteners on cooking projects.  By January 2004 Faith was certain that she wanted to launch a new business focused on teaching kids to enjoy the art of cooking and eating, and Kids Cook! was born.

Today, Kids Cook! offers year round programs that provide kids the chance to discover the joy of creating healthy, delicious food they can make themselves.  Since launching Kids Cook! in  2004, Faith and the Kids Cook! staff have worked with over 2,000 kids in after school classes and summer camps in conjunction with public and private schools and libraries in Central Arkansas.

As a member of the Arkansas Hunger Relief Alliance, Faith is a trained facilitator for Cooking Matters at the Store, a hands on grocery shopping program that takes participants to the grocery store  to show them how to make healthy choices while shopping economically.  In 2012 Faith was trained to deliver the Cook Smart Eat Smart cooking skills program for adults and has delivered that program to veterans in Pulaski County through a collaboration between the VA and the University of Arkansas Cooperative Extension Service.

Between 2004 and 2007, Faith and her kid cooks hosted a monthly Kids Cook! segment on KATV Channel 7’s “Daybreak” morning show to demonstrate “kid-friendly” recipes.   In addition, Faith and her students have been featured in the Arkansas Democrat-Gazette, in Southern Living Home for the Holidays 2006 issue, on Little Rock’s THV, Channel 11 and on Little Rock’s KARK, Channel 4 discussing one of Kids Cook!’s core messages – that it is possible to teach children how to make smart and nutritious food choices.  Faith was also a featured food writer and columnist for Arkansas’ AY Magazine between 2004 and 2016, and has authored a number of articles for Little Rock Family magazine and Arkansas Children’s Hospital’s Parenting in Arkansas magazine. Her expertise has led her to serve as a judge for a number of cooking contests including the Gold Medal Cookie Contest held at the Arkansas State Fair, the Eureka Springs Chocolate Festival, the Arkansas Hospitality Association’s 2006 Iron Chef competition and AY Magazine’s 2008, 2009 and 2010 Recipe Contests.

Her best critic for kid food is her son, with whom she tests all recipes.

Faith is a graduate of Connecticut College and holds an MBA from the University of California, Los Angeles.